A Musical in the Time of Covid: Ride the Cyclone at Carthage College

Ride The Cyclone at Carthage College 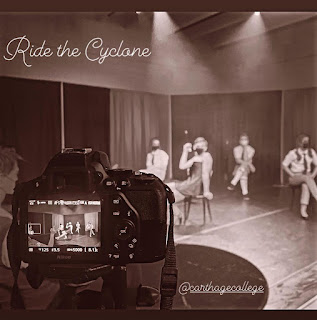 Cast on the second day of shooting
This musical was a rollercoaster and yes that pun was intentional. A musical in the time of Covid! What were we thinking?
When I chose RTC for Carthage's Music Theatre Workshop Show, I specifically wanted to feature some excellent senior MT majors AND focus on a show that was ensemble-driven. Getting this show approved by the dean was HARD because the cast is so small and often Music Theatre Workshop Shows are supposed to be a cast of 18-22 to get as many folks on stage as possible to work on roles and have show experience. Who knew that my obsession with this musical and my insistence on working with a small cast was going to be such a blessing? Who knew that this was the perfect musical to do during Covid? RTC, a show about the resilience of the human spirit in the face of senseless tragedy, is a musical for right NOW. 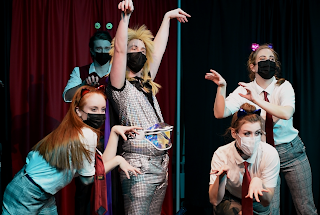 From L to R: Christine Barreca, Matthew Wrbanek, Nate Myers, Anna Brown, Ashley Veltman
None of us knew what we were getting into when it was decided that the show would indeed go on. Is this a movie or a staged musical? Can I have parts that feel like a movie? Can I add special effects since we are usually so low-tech in workshop shows? Do we even have enough lav mics for this?! How does one edit sound? 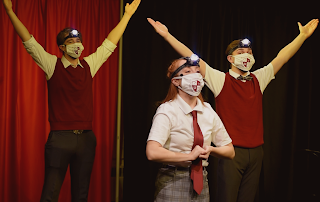 St. Cassian Choir singing "Uranium"
We streamed our edited movie musical on Broadway on Demand and hundred of folks got to watch it all over the country. It was truly a celebration of the determination of so many to do art during this time. I was so proud of my students, and so grateful to my colleagues who helped make this a possibility. 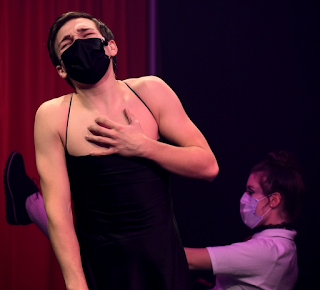 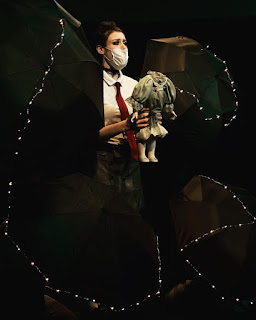 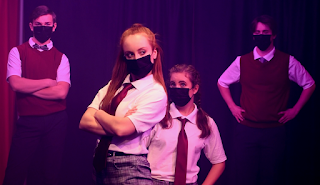 Popular posts from this blog

The Woman In Black is coming to Spoleto Festival USA! 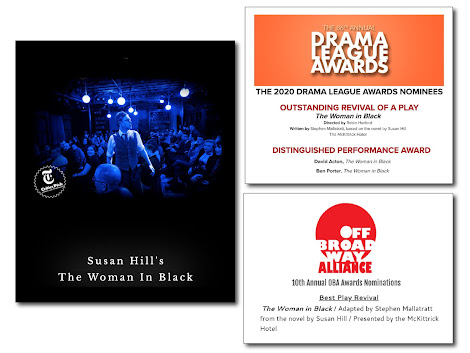 A year ago, I posted this graphic on Facebook surrounded by posts where I bragged about the fancy new masks I was buying from costume designers and wardrobe folks around the country and saving Hyrule from its enemies. I am thrilled that in two weeks, I will be getting on a plane to Associate Direct THE WOMAN IN BLACK at the Spoleto Festival USA in Charleston, South Carolina.     I feel honored to be among the first folks I know to go back to work to do in-person productions with live audiences. It is crucial that we succeed in our safety protocol and I am so satisfied with the COVID-19 protocols at Spoleto. All festival artists have promised to not eat indoors, we will all be masked except for moments where actors are performing or musicians are playing, and our performances will all be outside. The WOMAN IN BLACK pod of 7 is fully vaccinated. We are going to do our best to restore confidence in doing theatre and returning  to the theatre, and I am confident in our ability to do
Read more

The Woman is BACK 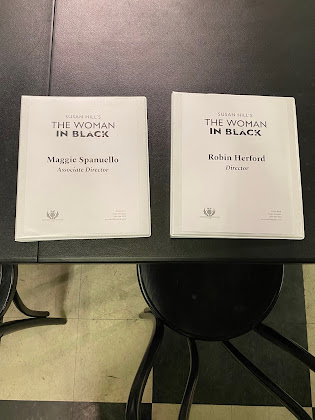 Image Description: Two white binders on a table that read "The Woman in Black." One belongs to Robin Herford, director, and the other Maggie Spanuello, Associate Director.     The WOMAN IN BLACK has reopened Off-Broadway at the McKittrick Hotel! I was in the room again with THE MAN, Robin Herford, and the wonderful crew at the McKittrick. Audiences have been terrified, performance reports have been a joy to read, and I've been reunited with David Acton and Ben Porter from our first production pre-covid.      I'm also in the room with James Evans, who joins us again as the understudy for "The Actor," and Simon Hedger, who is the understudy for Mr. Kipps and joins us from the 2018/2019 US Tour. James was put on for two of our opening weekend performances and got  an excellent review ! I am a proud associate director.       Image description: Robin Herford, wearing a great shirt and his navy blue mask, next to Maggie Spanuello, wearing a black shirt and a bla
Read more

May Term: Race and Gender in American Music Theatre 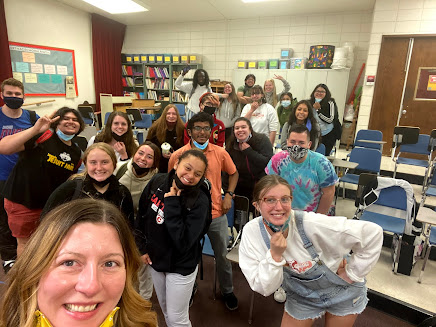 I have had the distinct pleasure of co-teaching my last class at Carthage College with Raven Dockery (she/her) on "Race and Gender in American Music Theatre." I have always loved teaching Writing Intensive courses at Carthage because most of the students in my class are NON-MAJORS! There are 23 students in this class (in-person and online), 12 of them are students of color, and their majors are Nursing (over half our class!), Theatre and Music, Computer Science, Psychology, Exercise and Sports Science, Poli Sci, Graphic Design, and International Political Economy. Raven has been blowing their minds teaching the history of the Black Experience in the performing arts for the last 200 years, and we have had some incredible guest speakers the first couple of weeks. Sawyer Smith (they/them), Chicago actor and Choreographer, was our first guest and for over half our students, this was their first experience ever talking with someone who is trans. When I invited Sawyer to &quo
Read more
Back to maggiespanuello.com